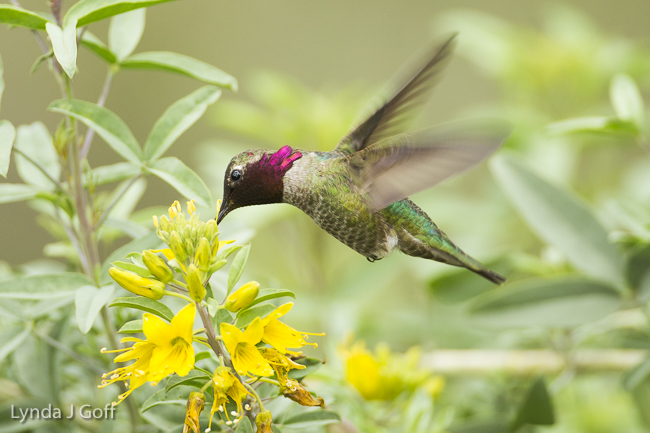 Duchess Anna Messena of Rivoli was the inspiration for this hummingbird’s scientific name: Calypte anna. Anna’s are approximately 11cm/4 inches long when mature. The adult male’s vivid plumage is metallic bronze and green on the back, with a bright red crown and gorget, and a light gray breast. The adult female is less colorful, consisting of green, gray and white plumage, and outer tail feathers tipped with white.

Anna’s migrate to British Columbia and Arizona in winter to breed in mountainous or shrubby areas. The male Anna’s initiates mating by putting on a colorful acrobatic, diving display, chirps loudly, and sings. Mating is the only time that male Anna’s actually sing. After mating, the male leaves the female, who seeks a secure place with nearby food sources to make her nest. She lays two tiny eggs, which will hatch in a couple of weeks, and the hatchlings begin to fly a few weeks after hatching.

Hummingbirds are capable of torpor, which is evolutionarily similar to hibernation. Torpor conserves energy by slowing down the metabolism when a hummingbird is cold or has scarce food sources.

Hummingbirds’ powerful aerodynamic wings allow them to fly up, down, sideways, forward, backward and upside down, and they can live in the tops of tall trees to avoid predators. The main predators of hummingbirds are housecats, poisonous spiders, and snakes. The cats instinctively kill the birds, often without eating them, when the birds venture into backyard gardens. The snakes and poisonous spiders that live in the trees where hummingbirds make their nests can also potentially kill them. 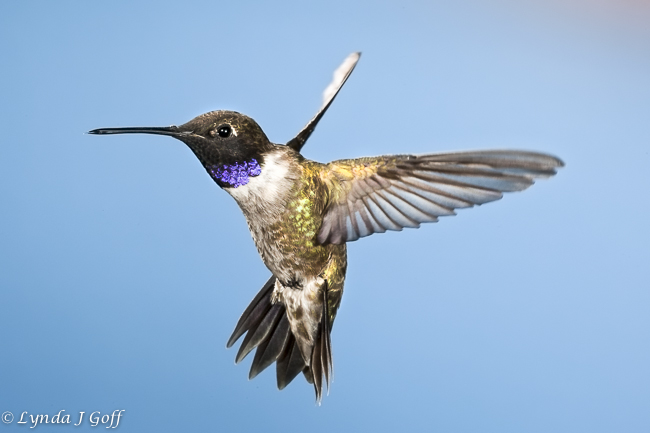 The adult male’s plumage is not as varicolored as other hummingbird species. The black-chinned’s crown, breast and back are metallic green, and the gorget is black. There is a violet-blue band around the neck, and the breast is white. The adult female also has a metallic green crown, breast, and back, and a white breast, but the throat is white with black spots. The tips of the tailfeathers are also white.

Black-chinned hummingbirds migrate to riparian woodlands and foothills to breed,

primarily March through May and August through September. Some winter in Mexico, while a rare few migrate in the Southeast October-March.

Black-chinned males’ wings have a distinctively loud buzzing in flight. 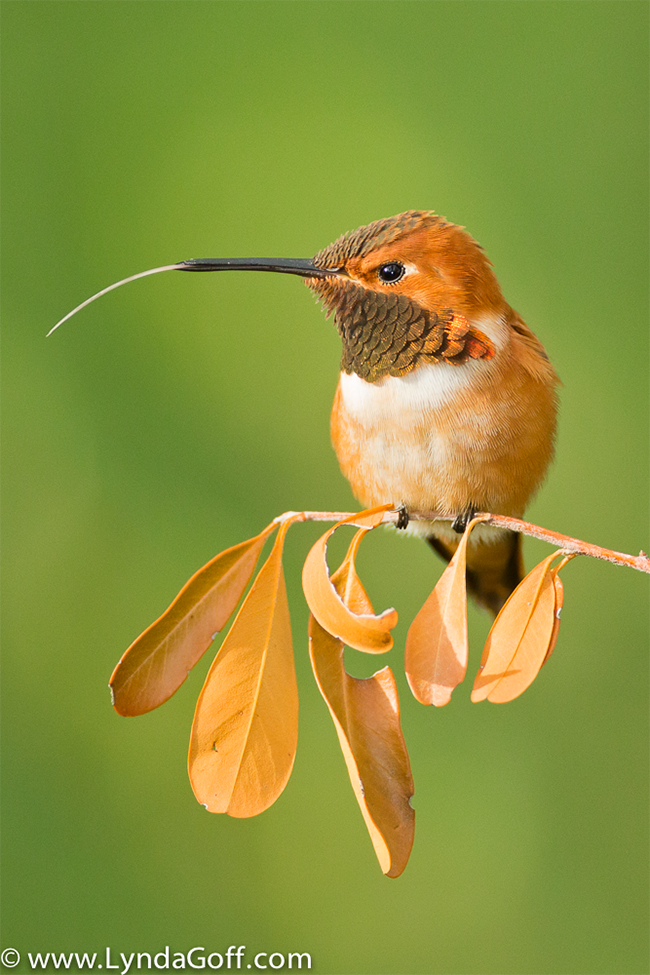 Known scientifically as Selasphorus rufus, this hummingbird is has a reputation for overall feistiness and aggression at feeders. All hummingbirds are territorial, but Rufous is so territorial, it will even confront wasps, bees, and any other creature that tries to drink nectar from its flowers or feeders. The adult male’s gorget is flame orange with green spotting on the back, but also may be solid green. The adult female’s throat is partly white with bronze-green striations/flecks and a patch of red in the center.

Rufous have been sighted in all fifty states with the exception of Hawaii, Quebec, and Prince Edward Island. Rufous also boasts a wider distribution in North America than any other hummingbird.

Rufous migrate to breed in the American Northwest, primarily during March-July in parks and open woodlands. Although most male hummingbirds put on a good show during mating season, the Rufous is comparatively less flamboyant. They also migrate late February through early May, late June through September and, on rare occasions, in the East, July through November. Some Rufous winter in Mexico.

Rufous’ migrations are longer than any other American hummingbird—some fly as far as 2,000 miles, one-way, and for 500 miles without stopping. 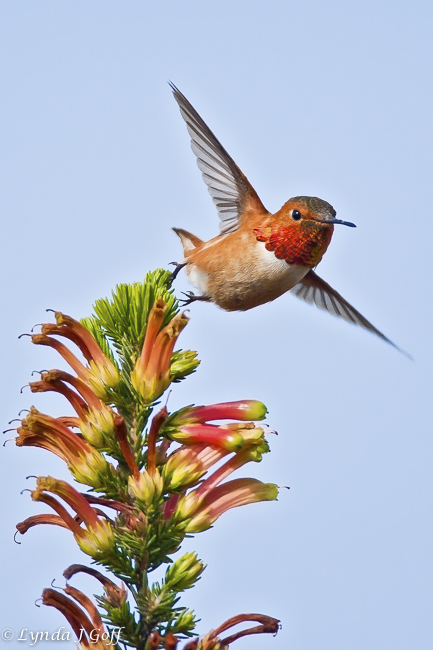 One of only two common northern California nesters (along with Anna’s), the Allen’s hummingbird, Selasphorus sasin, is a cousin to Rufous, though with a much smaller migration range. The adult male’s head and back are metallic bronze-green, the flanks are rufous, and the gorget is an iridescent red-copper. The adult female’s back and sides are rufous, the breast is white, and the throat is white, as well, with some red spots. The rounded tail of the female has white tips.

Allen’s migrate to breed in California and Oregon around February in gardens, meadows, and wooded areas. Like other hummingbird species, the male Allen’s initiates mating by showing off his aerial skills. In Allen’s case, the skills include a 25 foot frantic flight arc similar to the arc of a pendulum, interspersed with mid-air, percussive vocals and wing noise.

A subspecies of Allen’s (Selasphorus sasin sedentarious) living on the Channel Islands and nearby mainland does not migrate. 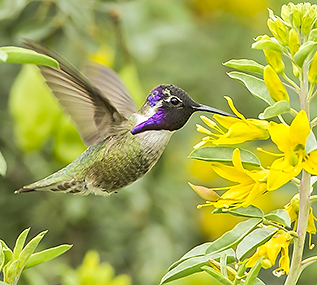 Calypte costae, or Costa’s, prefers a desert climate and habitat of sage scrub, washes, and a variety of plants. The adult male’s back is metallic green, the crown and gorget are violet-purple, and the breast is green. The adult male’s throat also has very long feathers on the sides. The adult female’s back and crown are green, the breast is white, and the throat is white with black speckles. The sides are creamy beige and the tips of the tail feathers are white.

Costa’s have been sighted in Alabama, Alaska, Arizona, British Columbia, California, Florida, Kansas, Nevada, New Mexico, Oregon, Texas, and Utah. They winter in southeastern California, southwestern Arizona, and Mexico. Unlike other hummingbirds, Costa's migrate in a small region for shorter distances, compared to other hummingbirds.

Costa’s migrates to breed in the deserts of Arizona and Mexico in the spring, but will remain all year in suburban gardens that flower year-round. The aerial display for Costa’s males mating involves shooting straight up in the air, then diving, Kamikaze style, while sounding a high pitched, shrill whistle.

Costa’s are usually the first to be seen in the spring.

The Greek muse of poetry, Calliope, inspired the scientific name of Selasphorus calliope, the smallest bird in North America. The adult male’s back and crown are metallic green, the gorget is white with purple overlaying feathers that can be flared out for dramatic effect. The adult female’s back and crown are green, and the throat is white with streaks of black, while the sides are creamy beige and the corners of her tail are tipped with white.

Calliope migrates to breed at heights above 4,000 feet in early spring, close to tree lines and streams. Males map out their breeding grounds and fiercely scare off the competition. The flight display of courtship includes flying between 30 and 100 feet high, then nose dives with vocalic popping and wing buzzing at the end of the dive, then repeats the behavior. The male also flares out his purple overlaid throat feathers while hovering before his chosen female.

The Calliope hummingbird has been known to fly at an altitude of 11,000 feet, and is the smallest long-distance migrant bird in the world.